How to beat the forgetting curve

Most people forget 90% of what they’ve learned just a few hours after learning it. This phenomenon is known as the forgetting curve. But what makes it so hard for us to retain information and — more importantly — how can we overcome it? Fortunately, there are several options that help.

By Kasper Spiro on Jan 7th

What is the forgetting curve?

More often than not, though, the brain defaults to the easier choice of forgetting new information. This phenomenon is known as the forgetting curve – a concept first introduced in the late 19th century by German psychologist Hermann Ebbinghaus.

Thankfully, there are ways to overcome the forgetting curve by triggering our brain to store information in our long-term memory.

As seen in the graph below, Ebbinghaus’s forgetting curve research revealed that the biggest drop in retention happens almost immediately after learning new information. 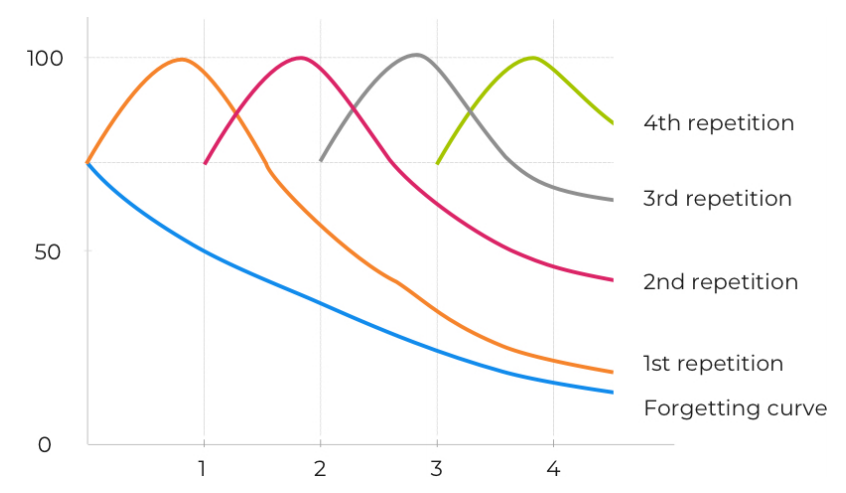 Ebbinghaus pointed out that the most effective way to beat the forgetting curve is to put the newly learned knowledge into practice both soon enough and frequently. This helps trigger the brain to remember the information and store it as long-term memory. As a trainer, there are several approaches you can take to optimize your courses for retention:

How to beat the forgetting curve

Repetition is key to retention. By frequently revisiting the newly learned content, the brain will mark the content as important, making it more likely that it stores it as long-term memory.

But it’s not just about presenting the same information in the same way over and over again. Because the brain can forget quickly, it’s important to give your learners a chance to rethink the knowledge soon after learning.

One example to facilitate repetition is through recap sessions. At the end of teaching a new course, for example, wrap the session up by recapping the topics and information covered that day. This way, learners won’t have to wait until their personal schedules allow them to revisit the content themselves.

Another way is by engaging your learners in a question-and-answer exercise at the end of your course. By engaging with the material and forming their own opinions, your learners’ brains are more likely to process the content meaningfully and store it in their long-term memory.

Another retention method Ebbinghaus suggested is spaced learning. This method involves reviewing the material during various timed sessions, while making sure to take timed breaks in between. By spacing the review sessions out over time, learners get the chance to revisit the material regularly, increasing their chances of retaining it.

How to combine built-in-repetition and spaced learning

Combining the repetition and spaced learning methods gives you a higher chance of beating the forgetting curve. Here’s an example:

Let’s say you have two chapters to teach in a day. You could introduce each chapter during two separate timed sessions while making sure to take a timed break in between. This ensures that you’re engaging the spaced learning method. To end the day, you can facilitate a quick review session where your learners can recap both chapters. This lets you build repetition exercises directly into your course structure.

The image below illustrates this combination of built-in repetition and spaced learning, where the black boxes represent new chapters and the colored boxes represent recap sessions: 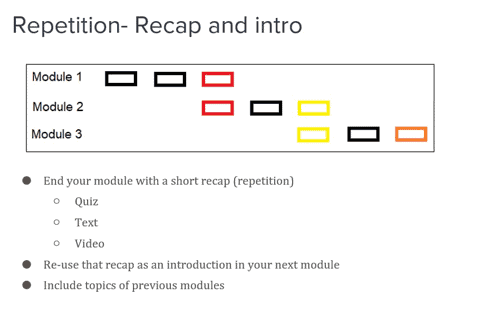 Other ways to beat the forgetting curve

Consider a traditional classroom setup where face-to-face sessions are used to introduce new material and then learners review what they’ve learned by completing assignments in their own time. Under the flipped classroom model, learners can learn new material in their own time and utilize face-to-face sessions as a chance to ask follow-up questions and engage in discussion.

Allowing learners to think about the material and come up with practical questions in their own time means their learning process isn’t limited to timed in-person sessions. Instead, the in-person session serves as an opportunity to go beyond initial learning and engage with the content more deeply, making it more likely for the brain to store it as long-term memory.

When it comes to sharing resources for your learners to engage with outside lessons, it’s important not to overload them with new information. Curating a list of existing content can be a more effective way to share your expertise rather than creating all-new content for your learners to keep up with.

And creating new content is also time-consuming. By pointing to relevant content that’s already out there and providing meaningful context, you not only save yourself time but also ensure your learners get the resources they need sooner.

As Ebbinghaus’ research suggested, learning doesn’t stop once knowledge has been shared. Learning happens in different stages, which is why it’s important to tailor your content to keep up with your learners’ changing needs.

A concept known as the 5 Moments of Need by Bob Mosher and Conrad Gottfredson illustrates five different moments learners find themselves in, each providing a different way for them to internalize knowledge:

Keeping your learners’ various learning moments in mind will help you create a wide range of content. This ensures that your learners are always well-equipped to beat the forgetting curve at different stages.

Kasper Spiro is the CEO of Easygenerator and a recognized thought leader in the world of e-learning. With over 30 years of experience, he is a frequently asked keynote speaker and well-renowned blogger within the e-learning community.

E-learning
E-learning content: Cost or value?
Concerned about the costs of e-learning? We have a better question for you: what value will it add?
By The #Generators on Apr 15th 2021

Or let us help you get started. Book a personal onboarding program together with dedicated success managers to ensure your team gets the most out of Easygenerator.

Book a demo
This site uses cookies. By continuing to browse the site you are agreeing to our use of cookies. To find out more about the cookies we use, please review our Privacy Policy.I agreeLearn More